After completing the orthographic view, draw parallel receding lines at about 45° angles from the corners of the view (either to the right or to the left), as shown in Figure 2.7 and Figure 2.8, to develop the three-dimensional effect. Receding lines are drawn to the right for developing a right oblique drawing and to the left for developing a left

oblique drawing. Lines are not usually shown for any part of the object n^i mr о / , 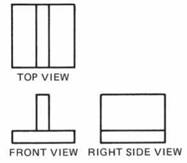 FIGURE 2.6 ■ Three-view orthographic that is not visible. The extent of the receding lines is about one-hall the, . r Г1 . j

drawing of a fabricated

length that would be shown for an orthographic drawing. This is so T-suppoit

that the sketch will appear to be true to the original form of the object.

The oblique sketch is completed by repeating the same lines shown on the original orthographic view at the terminal points of the receding lines. Note that, on occasion, broken lines may be used to show hidden edges in order to better visualize the object.

FIGURE 2.9 ■ Variations of oblique circles and methods used for sketching each.

To develop an isometric sketch, isometric graph paper is preferable. An isometric sketch has all of its surfaces shown at 30° angles. In the initial preparation of the sketch, a view of the object that best shows its shape and detail is selected and sketched at a 30° angle, Figure 2.10.

After completion of the basic view, Fig­ure 2.10, parallel receding lines are sketched at 30° angles from each of the corners, Figure 2.11. Only those lines that represent the visible part of the object are shown. The sketch is completed by drawing the back edges at points that approximate the size of the object. Receding lines are reduced in length (foreshortened) to about two-thirds of the orthographic line length.

In cases where surfaces of the object are on different planes, a sequence is followed in developing the isometric sketch, starting from the front face and developing each portion progressively to the back face, in effect build­ing upon the preceding portions, Figure 2.12.